Time for a catch up! 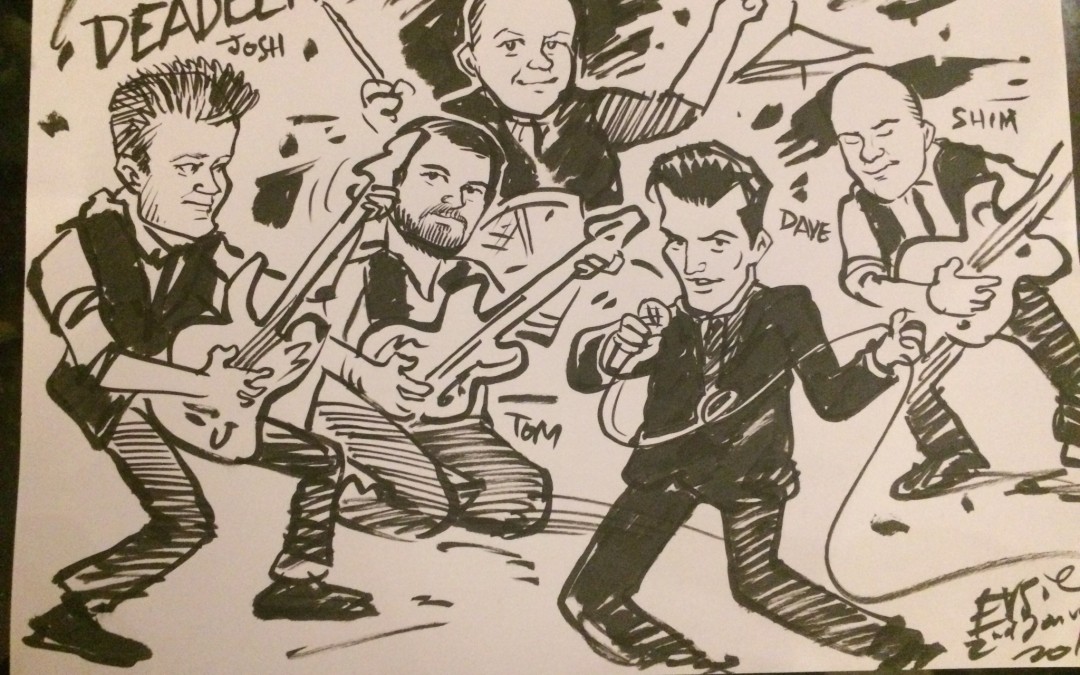 Hi everyone and Happy Easter! We’ve been very busy boys over the last month and have been lucky to play at some great weddings. Read on….

First of all, congratulations to our friends Zak And Leanne who are now Mr And Mrs Hackett! And thanks to Marge for helping things run smoothly on the night and taking some cracking photos of the band.

Deborah’s wedding on March 31st took us to a new venue, the picturesque Midland Hotel in Morcambe. One of the happy couple’s requests was Billy Ocean’s “Red Light Spells Danger” – we liked performing it so much we’ve kept it in the set…. Speaking of which, the repertoire section of our website’s been updated – check out what we’ve added at deadbeatsband.co.uk/repertoire .

On April 1st we had the honour of performing at the awesome Rivington Barn for one of our most avid fans, Laura and her husband Chris – the new Mr And Mrs Wright-Dixon! Highlights included a full dance routine by the bride and bridesmaids to Tiffany’s 80s classic “I Think We’re Alone Now” (performed by the band!) and the whole day was filmed by our friends at Marriage In Motion.

The next day we were back at The Midland in Morcambe for Jane and Rob’s wedding. Another top night with another request that’s stuck – Spandau Ballet’s “Gold” – and a crowd that kept the dancefloor packed throughout the evening.

Louise’s wedding reception the following week took us to another great venue we’d never played at before, Lancaster Brewery. After a small wedding in Whitewell the week before the newlyweds pulled out all the stops for a very well-organised p**s up in a brewery for all their friends and family! Amazing food, bouncy castles for the kids and a crowd that were really into their music, rocking out to requests by the La’s, Pulp and The Ramones late into the night.

Which brings us up to the Easter Weekend just past. The crowd at Bartle Hall on Thursday really went for it to celebrate Scott and Gemma’s wedding, partying late into the night and still going for it on the dancefloor long after the band had finished, keeping Dave busy with requests till the early hours.

The Belle Vue on Friday must be in the running as one of our all-time favourites there. Nice to see so many familiar faces and we’re glad you all liked the new material – great to get some songs from Ed Sheeran’s massive new album in the set. A very lively and friendly bunch ensured a brilliant party atmosphere for Good Friday – thanks to everyone who came down.

And as for Saturday, what can we say? ‘Goughstock 2017’ aka ‘Dezfest’ was an awesome party to celebrate Mr Derek Gough’s 60th birthday in style. The band rocked out in a stunning marquee along with top DJs and Jimmy Sax who didn’t need much encouragement to join the band for an encore of Blues Brothers’ “Everybody Needs Somebody”. Many thanks to Phillipa, Derek and all their family and friends for inviting us to be part of it and looking after us on the night.

With two functions in Lytham this weekend plus a midweek trip to Harrogate for our annual performance for Planning Forum the following week the band remain busy as ever! You can catch us next at The Sands Venue in Blackpool on Friday April 28th more details of which can be found here http://www.the-sands-blackpool.co.uk/band/806/the-deadbeats and we’re back on home turf at The Castle Gardens on the first Friday in May. Happy Easter from all at Deadbeats HQ! xx